Most married folks celebrate their wedding anniversaries, and in particular they pay attention to the “big” anniversaries: 10 years, 25 years, 50 years…you get my drift. Today, Celeste and I are celebrating a day that isn’t traditionally celebrated, but is kind of a cool number: 10,000 days of marriage! It’s been an incredible journey during these 240,000 hours of marriage and I’m looking forward to walking through the next 14,400,000 minutes with her, although I suspect it will be a slower pace.

BTW, any guesses why I have that symbol at the top of this post?

Normally I’m not at a loss for words, but as I write this I truly can’t come up with anything that would come close to adequately describe how I feel today about the woman who joined me in saying “I do” 25 years ago today. What I can say is that I’m amazed that 25 years can seem to pass so quickly and yet every one of those years feel like they pack a lifetime of memories. None of those years were easy; all held days, weeks and months of ecstasy; some held weeks or months of challenges and pain; most held a dose of all of that. The result is that we stand together here on the other side of those 25 years and I love her more than I could ever imagine back when we were so young and untested.

Most people spend their lives wondering if they’ll ever experience a miracle. I wake up every morning and look into the eyes of mine. I’m truly a man who’s been blessed beyond measure. 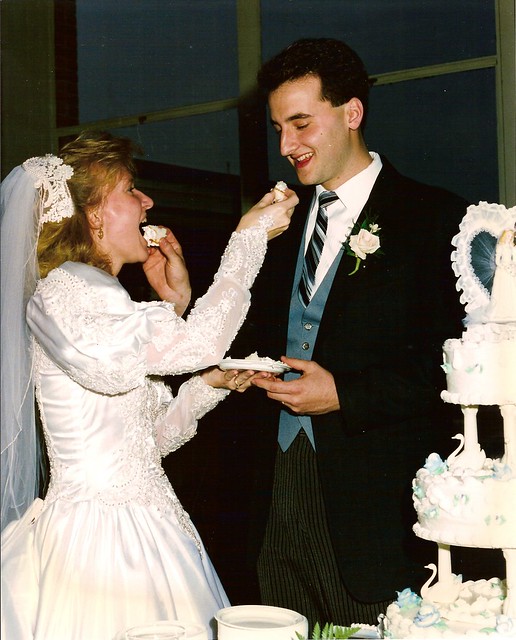 I truly enjoy listening to a married couple talk about their journey together which is why I’m really digging SoulPancake’s series of videos called The Marriage Project. Here’s the latest: This quote from David Brooks was found on Rex Hammock's blog.

“The first thing to worry about: Will I marry well? This is the most important decision you’re going to make in your life. If you have a great marriage and a crappy career, you will be happy. If you have a great career and a crappy marriage, you will be unhappy. I tell university presidents that since the marriage decision is so central, they should have academic departments on how to marry. They should teach the neuroscience of marriage, the sociology of marriage, the psychology of marriage. Everybody should get a degree in how to marry. Nobody listens to me. So give yourself a degree. Read Jane Austen novels or George Eliot novels. Learn how to think about this problem from the masters. And take your time.”

There is an excellent piece in the Washington Post that I found to be at turns heart warming and heart wrenching.  It's a story about love, the vows of marriage, and at the most basic level, love.  I don't want to provide any excerpts for you here because quite frankly the story is too well written as a whole to be sampled in pieces. I've shared it with a few people and have been fascinated by their varying reactions; people I trust and with whom I almost always agree have disagreed with me and each other on certain aspects of this story. Despite those disagreements I feel safe in stating that after reading it all of us found our own "issues" paled by comparison.

Here's the link to the story – I can't recommend it highly enough.

I have this theory that you really see the true stripes of someone when they're drunk.  If a person who's normally mild-mannered turns into a raving loon, AKA a mad drunk, then I think that when the chips are down and he's in a stressful position that's the guy that will blow a gasket.  To me that same theory holds true for people who comment on news stories online.  Even if they're normally civil in the real world their true personalities come through in the comments they drop all over the online world as they hide behind their computer screens.

What reminded me of this most recently were the comments left by multiple readers on the Winston-Salem Journal story about the latest census figures showing that only 45% of households in Forsyth County are headed by married couples.  The story also broke down the racial demographics and contained information like the following:

Among black residents, only 27 percent of households are headed by a husband and wife. About half of the black children in Forsyth County live in homes headed by only their mothers, with another 20 percent being raised by grandparents, fathers, and other relatives.

"I don't think it is a good trend," said Forsyth County Commissioner Walter Marshall, who is black. "I guess the new generation just does not believe in marriage. There are so many things involved."

Marshall said that black males too often find themselves "not marriageable," due to high incarceration rates, unemployment and lack of education.

"Young black ladies will tell you that they want to be married, but they don't want to marry at any cost,"Marshall said. "They don't marry much; they just stay together."

You can guess what kind of comments have been posted and I have to say that with every passing day I become less and less surprised at how petty and mean people can be, especially when they don't even have to have the balls to be mean to someone's face.

BTW I'm also getting really frickin' tired of people equating marriage with some kind of magic silver bullet for lifelong happiness.  I'm fairly sure studies have shown that growing up in a stable two parent environment increases the chances that a child will grow up to lead a happy, stable life, but I'm quite sure that marriage isn't a prerequisite for having a stable two parent environment.  I'm also certain that there are more than a few households that are dens of misery and headed by married people, and that there are single parent households that are dens of happiness.  In short, marriage is a traditional form of cohabitation and household building that is declining in popularity and that has caused some people with traditional values to get their panties in a twist.  Personally I think we should worry less about the institution of marriage and more about helping people understand how to build a happy household and raise well adjusted members of society.

For the record I'm happily married to a woman I can't believe has put of with me for as long as she has.  We're closing in on 20 years of marriage and 23 years of just plain digging each other, and I have no doubt I'd feel the same way about her if I was labeled her husband, her housemate or her biggest mistake. The latter is how many people think of me.

As if losing jobs and nest eggs isn't bad enough, apparently the Great Recession is also killing the libidos of the grey haired set:

Americans 45 and older are far more open to sex outside of marriage than they were 10 years ago, but they are engaging in sex less often and with less satisfaction, according to a major new survey by AARP.

"The economy has had an impact on these people," she said. "They're more liberal in their attitudes, yet they are having sex less often. The only thing I see that's changed in a negative direction is financial worries."