My better half and I are trying to sell the house we lived in for our first 12 years in North Carolina, and let’s just say the process is different than our past house sales have been in the past. Probably the biggest change has been that there are far more things we, as owners, can do to help market the house. Among them is cultivating our house’s Zillow listing.

Our realtor set up the listing, but once it was set up we ended up writing a lot of the copy and adding some of the unique selling points for the house and neighborhood. When we bought the house the online tool all the realtors were using was Listingbook, which was pretty cool for that time, but we were completely dependent on the realtor to make any changes we felt were needed. With Zillow we’re able to do it ourselves, which is great because we’re the party with the greatest interest in getting everything right.

Unfortunately, there haven’t been any takers on the house, but this last weekend we learned exactly how powerful video can be. Zillow allows you to post a video on your listing and we had a video we’d shot a while back, but you have to use Zillow’s app to actually record the video so we didn’t have a video on our listing for quite a while. This past Saturday we were at the house and I took a few minutes to walk around the house shooting the two minutes of video that Zillow’s app allows, and then uploaded it while we were still there. The result? Views and saves of our house listing spiked big time.

The result? Views and saves of our house listing spiked big time.  Here’s a graphic showing the daily numbers going back a month: 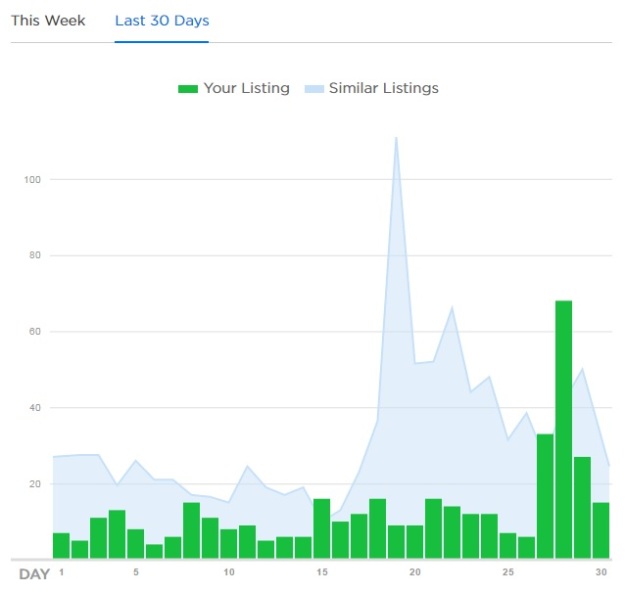 The traffic on our listing is represented by the green bars, the average traffic for houses like ours is represented by the blue line chart behind the green bars. The second highest day is the fourth bar from the right, which was last Saturday when I uploaded the video in the afternoon. The highest day was the next day, Sunday, which is also one of the very few days our listing exceeded the average.

We’ve had some small traffic increases in the past when we logged in to edit some text, but as a rule we were getting between 6-12 views a day with one or two saves a week – a save is when someone saves the listing in the Zillow app so they can come back later or get alerts when a listing changes – and nothing really moved the needle much until we posted the video. As you can see from this graph showing the last week the video made a massive difference, and keep in mind that the video was shot using my phone in about 15 minutes with no editing.

Now, if only we could convert that traffic into buyers!