Hunger Fact of the Day:

LGBT people are disproportionately food insecure — meaning a larger percentage of this group doesn’t have enough money to feed their family or themselves, relative to the general population. #feedingchangehttps://t.co/rY5cgdQ109 pic.twitter.com/00tbcs1eaA

I’m a proud member of Crescent Rotary Club in Greensboro and am most appreciative of their support for this walk (especially the support of “Mr. Rotary” Patrick Eakes. Crescent has about 80 members and those members are all extremely active in supporting the community, through volunteer hours and through financial support via the Crescent Rotary Club Foundation and the Rotary International Foundation.

I’ll highlight just two of Crescent’s many activities this year. First, the club worked with Second Harvest to support the Community Cupboard at the East Market Seventh Day Adventist Church in Greensboro. The club’s foundation donated $4,000 to help purchase new equipment and club members volunteered to help serve food to members of the community who were impacted by the tornado that hit East Greensboro in April. Crescent Rotary Club Foundation also donated $20,000 to the fund established by the Community Foundation of Greater Greensboro to help immediately re-house those who were displaced by the tornado.

If you’re in Greensboro I highly recommend checking out Crescent – it’s a great place to find like-minded business people who are all about serving their community. 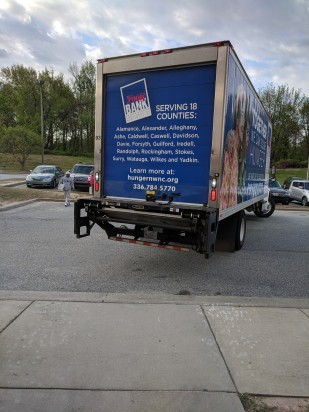 Activity Day 49-51: The walk on day 49 was a trip. First, I stepped right over a black snake that I thought was a stick until I saw it slithering away right AFTER I’d just stepped over it. Then about five minutes later and just a couple of blocks away, a very large owl flew out of a tree and directly in front of me before perching itself on the house I was walking by. The combination of those two events had my heart rate WAY more elevated than it normally would have been. Luckily days 50 and 51 had no drama because this old man can only take so much.

Miles walked/run: 15.28 miles. Here are the screenshots from my FitBit:

Want to donate to support Second Harvest? It’s easy to do right here!

Why are jobs important? Well, beyond the obvious there’s the added benefit that it helps keep people out of trouble. From the May, 2015 issue of Rotarian Magazine:

Summer jobs can help prevent violence among disadvantaged students, according to a large-scale trial out of the University of Pennsylvania and the University of Chicago Crime Lab. The study involved 1,634 teenagers from 13 high-crime schools in Chicago, and a local program that places youth in part-time paid summer jobs and pairs them with mentors. The job-assignment intervention reduced violence by 43 percent over 16 months, with nearly four fewer violent-crime arrests per 100 students compared with the control group.

From the same issue of the magazine comes this little tidbit of info:

One percent of the global population owns nearly half the world’s wealth, according to a new report from Oxfam, and that share is expected to exceed 50 percent within two years. The richest 20 percent of the population owns most of the other half of the world’s resources, and the remaining 80 percent of people share just 5.5 percent. The combined wealth of the 80 richest individuals in the world has doubled since 2009, and surpasses the combined wealth of the 3.5 billion people in the bottom half.

If our region ever makes it onto a national news map it's usually Greensboro that's listed. They save Winston-Salem for things like, you know, floods.
When you put his treat in a box to make him work a little for it.