The 80 Republican representatives who signed the letter sent to House Speaker John Boehner urging the course of action that has led to the government shutdown were dubbed The Suicide Caucus by none other than conservative columnist Charles Krauthammer. Who are they and where are they from? Let's see:

Meadows was not pleased with how Boehner and his fellow Republican leaders in the House were approaching the September fight over spending. The annual appropriations to fund the government were scheduled to run out on October 1st, and much of it would stop operating unless Congress passed a new law. Meadows wanted Boehner to use the threat of a government shutdown to defund Obamacare, a course Boehner had publicly ruled out…

Before Meadows sent off his letter to Boehner, he circulated it among his colleagues, and with the help of the conservative group FreedomWorks, as well as some heavy campaigning by Senators Ted Cruz, Marco Rubio, and Mike Lee, seventy-nine like-minded House Republicans from districts very similar to Meadows’s added their signatures.

Here's a map showing the 80 districts. I live smack dab in the middle of the heaviest concentration: 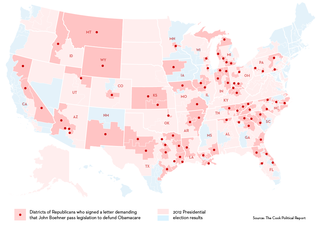 But are they really suicidal? Actually they're acting rationally if you look at where they're coming from:

In one sense, these eighty members are acting rationally. They seem to be pushing policies that are representative of what their constituents back home want. But even within the broader Republican Party, they represent a minority view, at least at the level of tactics (almost all Republicans want to defund Obamacare, even if they disagree about using the issue to threaten a government shutdown).

Most folks here in the land of the Suicide Caucus despise "libruls" and distrust the government intensely. What would be interesting to see is how they would react if their reps got their way and shrank government programs drastically. Most folks don't realize all the programs the government is behind – "Keep the government's hands off my Medicare! – so would they put two and two together and blame their representative for their lost money/service? Probably not.

Benefit of working at home - lunch on the porch, cool breeze in the air and the refreshing roar of leaf blowers just next door. #covidlife
I know someone who was very happy to see the sun come out. #covidproject