After the SBA released the PPP data to the public I decided to take a look at the numbers for the three larger cities in the Piedmont Triad: Greensboro, High Point and Winston-Salem. Since the SBA divided it’s data into two separate sets, loans over $150,000 and those less than $150,000 I combined them all in one spreadsheet and then sorted by city and the size of the loan. Here’s what I found: 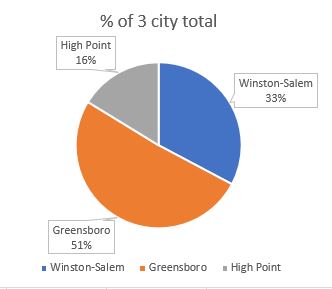 The data is also broken down by loan amounts and this is how the loan sizes broke down:

If you want to dig into the data yourself you can download the files here.