Let's file this in the "it's a huge small world category."  I have family member that's on a National Geographic cruise that departed from South America and is making stops at a variety of remote locations including the Tristan Da Cunha island group.  Yesterday I receieved an email from her with an update on the trip, and in it she mentioned an oil spill on Nightingale Island that they were seeing first hand and that I'd not heard about at all. Here's part of her update and a picture she sent with it: 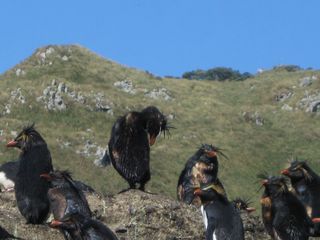 Not sure how much news has been generated in the US, but the wreck of the cargo ship that dumped diesel fuel (not crude, as reported by the NY Times) and a shipful of soybeans into the ocean was at Nightingale Island, which is where we spent the day.  It is more than a little unsettling to see penguins and baby seals black and shiny with oil.  The penguins are rock hoppers, which are the ones who look under normal circumstances as if they have a perpetual bad hair day, with bright orange topknots and slanty eyes.  There is a photo of some of them trying to get rid of the oil attached.  Nightingale is uninhabited, but full of birds – buntings, albatross, petrels, etc.  We had a zodiac tour around the base, and then headed toward Inaccessible Island, where the seas were simply too rough even for that.  We then headed back to Tristan de Cunha, the island we visited yesterday, to drop off some of the conservation staff we’d picked up and to refuel.  As I write this, the refueling is going on.  It was delayed because the ship from which the fuel is coming had been pressed into service to bring 750 penguins here so that the Tristaners can go about cleaning them up.  The little orange boat you see in one of the photos is the fishing boat from Tristan that brought these people out, so that they could round up the penguins.

Today I came across this post at the National Geographic Travel & Cultures site.  Kind of wild that I have family traveling with the author of the post, but also kind of scary what a "minor" oil spill can do:

A week ago today, (March 16), the MV Oliva (Valetta) crashed on the rocks of Nightingale Island, spilling its cargo of soybeans and some 800 tons of fuel oil onto the coast. The ship was crossing the Atlantic from Brazil to Singapore when for reasons still unknown, it hit the island’s coast at a speed of 14 knots.

The captain and all crew escaped the vessel, but by last Saturday the ship had begun to break up in the heavy surf. The oil slick had spread around the island and then out to sea in the direction of Inaccessible Island.

Our ship, the MV National Geographic Explorer arrived at Tristan Da Cunha yesterday and sailed to Nightingale Island this morning, as intended on our original itinerary with Lindblad Expeditions. Instead of mere bird watching, we were met with the disturbing sight of penguins and seals coated in sticky black oil.

Nightingale Island is home to some 20,000 of the endangered sub-species of Northern Rockhopper Penguin. Sadly, these are the birds that were hit the hardest—thousands are expected to die from the effects of the oil spill. While this spill is relatively minor in comparison to so many in the world today, it represents a major calamity for the fragile birdlife on pristine Nightingale Island and a heavy blow to the small group of islanders of nearby Tristan da Cunha…

A crisis response team had arrived by tugboat from South Africa—a four-day journey by sea. Commercial divers were on the scene to help dismantle the shipwreck and attempt to prevent further fuel from spilling out into the sea.

Another fear is the introduction of rats from the ship to the island, which could decimate the local bird population, including several endemics to the Tristan Island group. Three different types of rat traps had been laid on the island, and according to Tristan’s conservation officer Trevor Glass, no rats have been seen or trapped so far.