So I was invited by a friend to sign up for the Flipboard magazine “Interesting Stuff” which I appreciate because it does look interesting. As part of the sign up process you’re asked to pick areas of interest so I was scrolling through the page, clicking away on topics that interested me, when I got to the category of “Kids.” Under that category four topics were listed – Pregnancy, Fatherhood, Motherhood, Parenting Teens – and when I clicked on Fatherhood this is what appeared:

So clicking on Fatherhood added four suggested categories that included Child Support, Child Custody, Family Law and Child Psychology. As a bonus the Child Support category is accompanied by what looks like a mugshot of a man and the Child Custody category is augmented by the picture of a dead cat with blood running from what looks like its head, although the head is thankfully covered by a black box. So apparently people interested in fatherhood as a topic are assumed to be seriously effed up.

Here’s what was served up when I clicked on Motherhood: 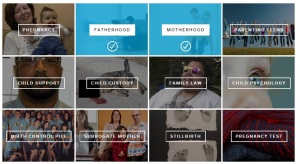 The suggested topics are Birth Control Pill, Surrogate Mother, Stillbirth and Pregnancy Test. Doesn’t appear as bad as the Fatherhood topics, but taken in total the whole parenting thing seems kind of depressing doesn’t it?