Ask any parent, at least any non-psychopathic parent, what their worst nightmare is and you can rest assured that it’s losing one of their children. It’s literally impossible to fathom what that feels like or to comprehend how someone deals with it. Recently, the oldest son of a local sports icon was killed in a car accident. That’s tragic in and of itself, but it truly hits close to home for me and my wife because that family just moved into a house a quarter mile from ours and we pass it every day. When we’re together one of us will always say something to the effect of “I feel so bad for them. I truly don’t know that I could deal with what they’re dealing with.”

The father of the boy who was killed truly is a local sports hero by the name of Rusty Larue. He played multiple sports for Wake Forest, went on to play pro basketball and has been coaching here locally for the last couple of years. Just this year he was hired to coach the boys basketball team at the high school my kids attended and the alma mater for current NBA great Chris Paul. In other words he’s exactly the kind of guy I would follow on Twitter and so I did. That’s why I saw this when he Tweeted it this afternoon: 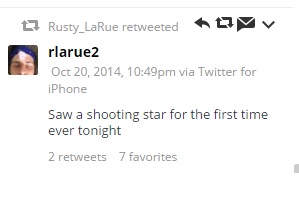 You’ll notice that it’s a retweet of a Tweet of his son’s from last year. When I saw this it truly had an impact – a mix of once again feeling sadness for the Larue family and a sense of amazement that they have this trove of memories for their son. Yes, most Twitter and other social media accounts are full of silly, fluffy, spontaneous and utterly mundane comments, pictures, links, etc., but they also contain little pieces of personality from the account owner so when someone is no longer with us we have these reminders about them that are quite different from the letters, pictures and other missives that people left in the past.

After thinking about it some more I began to wonder how the experience of seeing these reminders feels to the parents. Does it provide some solace, or is it a painful reminder of their loss? Maybe both? This is something I never want to find out about first hand as a parent.

Of course we will all lose loved ones in our lives, so while it may be a somewhat different experience than losing a child, we will have these types of reminders from the parents, siblings, grandparents, aunts, uncles, cousins and dear friends.

The Larue’s are well known for their faith, strong family and very supported faith community which I’m sure has been tremendously helpful. My sincere hope is that over time these pieces of their son’s online world, which to this generation is a critical component of their lives, can be  stitched together with the unique memories that the parents carry with them, can provide them with a some amount of solace and sustenance.

I have the same hope for all of us who lose a loved one.

<Note> I should be clear that we do not personally know the Larues. They literally just moved into their house a few months ago and we’ve not had the opportunity to meet them, but of course we would love to if and when the time comes. This was written merely as one father, with children the same age, trying to grasp what it must be like to deal with the loss of a child in today’s world.