“Shattalon” is not a legitimate word, rather, “Shattalon” is a unique word, which means that somebody made it up and it is applicable in only one case, to the road in Forsyth County which bears its name. It appears nowhere else in the world…

At that time, the section of road between Robinhood Road and the Yadkinville highway was usually referred to as Flynt Road, because it led to the Flynt land along the Yadkinville road. But he noted the trend that most roads were being named for the activities that occurred along them. Since there were several dairy farms on his stretch of the road, he envisioned it becoming Jersey Road, or Guernsey Road or something like that. But he was a progressive thinker and wanted his neighborhood to project a more modern aura, with a unique road name that everyone would find pleasing to speak.

There were only  eight households on that three mile stretch of road…Sapp, Hines, Adams, Shields, Barnes, Petree, Cartner and Brown, the last three dairy farmers. So he wrote their names and began thinking. He experimented with combining the letters of their last names to find an appropriate name for the road and came up with a unique word, which was adopted…Shattalon…a unique word

His name was Carl Sapp, born in 1905 to Thomas Jackson and Minnie Norman Sapp in the Mount Tabor community of Forsyth County. 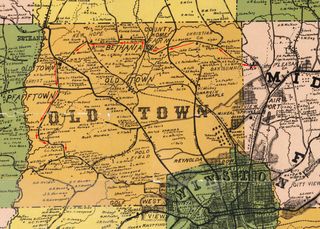