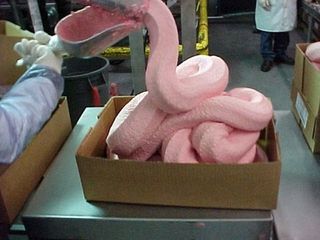 Via the Fooducate blog:

Folks, this is mechanically separated chicken, an invention of the late 20th century. Someone figured out in the 1960’s that meat processors can eek out a few more percent of profit from chickens, turkeys, pigs, and cows by scraping the bones 100% clean of meat. This is done by machines, not humans, by passing bones leftover after the initial cutting through a high pressure sieve. The paste you see in the picture above is the result.

This paste goes on to become the main ingredient in many a hot dog, bologna, chicken nuggets, pepperoni, salami, jerky etc…

Just think about that picture the next time you get ready to bite into a hot dog.  Yuuuum!